SAN ANTONIO, Texas — Update: 7:08 a.m. EDT July 31: The shark that was stolen over the weekend from a public aquarium has been returned and is recovering from her ordeal. "Miss Helen" is now in quarantine after her kidnapping Saturday and eventual return to the San Antonio Aquarium, CNN reported.

Originally aquarium officials thought that the shark may not survive the theft after it was discovered that a bucket the alleged thieves used to transport the shark had been used for a bleach solution at the aquarium. But the shark was said to be in good health when it was returned Monday night, KSAT reported.

"I'm so so happy that we got her back and she appears very healthy," Jamie Shank who works at the aquarium, told KSAT. "I can't believe what she's been through. She's a little fighter. She's a survivor."

Police said that the man accused of taking Miss Helen had a full aquarium in his home.

“There were different marine animals. (He) very much knew what he was doing and kept that animal alive, and was able to continue seeing that animal thrive, which was pretty shocking,” Leon Valley Police Chief Joseph Salvaggio told MySanAntonio. 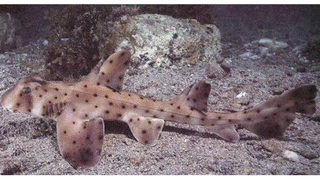 Update: 10:00 p.m. EDT July 30: The San Antonio Aquarium has its horned shark back, according to a post on the aquarium’s twitter page.

The small shark was rescued Monday after investigators tracked down one of the alleged thieves, who confessed to the crime, according to KSAT-TV.

One person is in custody as police continue searching for the two others.

The shark is not expected to survive because it was placed in a bucket that contained a bleach solution when it was stolen from the facility.

Three People Stole A Shark From An Aquarium By Hiding It In A Baby Stroller https://t.co/ranULeEzXR

Police are looking for a trio of thieves they say stole a shark Saturday from the San Antonio Aquarium.

Leon Valley police Chief Joseph Salvaggio told KSAT that three people, two males and one female, were caught on surveillance video allegedly stealing a small shark from an open display. KENS5 reported that the trio were seen on video taking the 2- to 3-foot shark out of the tank, wrapping it in a blanket and placing it in a baby stroller.

The alleged thieves are then spotted leaving the aquarium with the stroller. The suspects are believed to have left in a maroon Chevrolet Silverado truck, KENS5 reported.

BREAKING: Police are looking for a trio of thieves who stole a shark from the San Antonio Aquarium over the weekend by stuffing it into a stroller #KSATnews https://t.co/9BXqtPprwr

A wildlife expert told KENS5 the horn shark can only live outside of water for one to two hours. Aquarium employees discovered the shark was missing about 45 minutes after the theft, KSAT reported.

Police told KSAT a person of interest is in custody and police have located the truck, which was impounded. Salvaggio said those involved will face felony theft charges.

Kentucky woman sets herself on fire while smoking, putting gas into minibike

Impeachment trial schedule: Here is the proposal for how the trial will be conducted