Sessions was asked to resign by President Donald Trump the day after the midterm election held Tuesday, CNN reported.

Trump tweeted that Sessions' Chief of Staff Matthew Whitaker will be the acting Attorney General until a replacement is named and confirmed.

We are pleased to announce that Matthew G. Whitaker, Chief of Staff to Attorney General Jeff Sessions at the Department of Justice, will become our new Acting Attorney General of the United States. He will serve our Country well....

Trump also thanked Sessions for his service to the administration.

....We thank Attorney General Jeff Sessions for his service, and wish him well! A permanent replacement will be nominated at a later date.

>> Read: Who is in President Trump's Cabinet?

Trump was asked about Sessions tenure during a news conference the president held at the White House Wednesday. He did not answer the question about Sessions' status specifically, but said he was "extremely" satisfied with the Cabinet, CNN reported.

Sessions said in the letter that he had been "honored to serve as Attorney General."

According to the Washington Post, Sessions also said he had "worked to implement the law enforcement agenda based on the rule of law that formed a central part of your campaign for the presidency."

In addition to being named as acting attorney general, Whitaker is expected to oversee the Russia investigation and special counsel Robert Mueller from Deputy Attorney General Rod Rosenstein, CNN reported.

Trump did not personally ask Sessions to resign, instead it was Kelly who requested that the now-former attorney general step down Wednesday Morning, CNN reported.

Sessions was the first U.S. Senator to endorse Trump during his campaign. He also was the standard bearer for Trump's immigration, crime and law enforcement policies, The Washington Post reported. But despite that support, Sessions recused himself from the Russia investigation after it was found that he met with the Russian ambassador during the 2016 campaign, despite saying in his confirmation hearing that he had not met Russians.

Trump has not forgiven Sessions for the apparent disloyalty and said publicly "I don't have an attorney general," in September, The Washington Post reported.

After a tweet by Trump in February that said that Sessions was acting disgracefully, Sessions issued a statement, saying, “As long as I am the Attorney General, I will continue to discharge my duties with integrity and honor, and this Department will continue to do its work in a fair and impartial manner according to the law and Constitution,” The Washington Post reported. 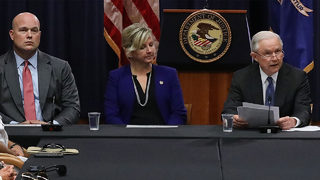 Coronavirus: Do masks work? How to prepare for the virus

Man breaks hip while mowing lawn, EMTs who helped him return to finish the work